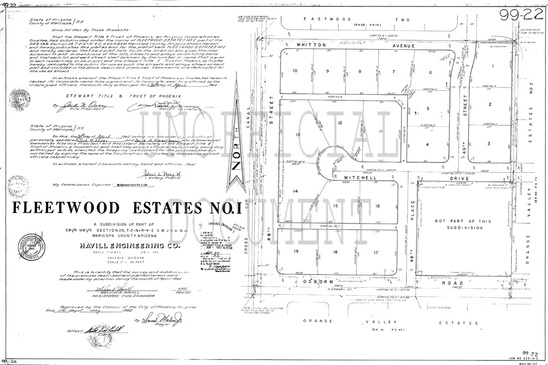 Original 1962 Plat Map for Fleetwood Estates No. 1
To tell the story of Kroeger Schloss, you have to go back to the beginning.  Before the evergreen turf, the crown moldings, and the wood floors.  Back further even, before the architectural pergola, the saltillo tiles, and the swingers-friendly hot tub.  Before the floor safe was installed and forgotten, there was a house.

The year was 1962 and the world was a simpler place.  In Phoenix's Arcadia neighborhood, a subdivision was planned called Fleetwood Estates.  Bound by Whitton Avenue on its north and Osborn Road on its south, the development spread east from 48th Street until it met a utility alley just West of 49th.  Fleetwood Estates looked like a capital-T missing one arm thanks to the large lot between Mitchell and Osborn to the east of 48th Place that was not included and made it look like the entire southeast quadrant was missing.  In what was becoming a premier suburb of the rapidly growing Phoenix metropolis, the land was subdivided and foundations were poured for 19 single family homes.  Though each lot would be developed and write a history of its own, none would soar to the same heights as what was initially referred to as Lot #5.

On May 7th, 1963 in New York's Madison Square Garden, Bruno Sammartino defeated "Nature Boy" Buddy Rogers in just 48 seconds to be named WWF Heavyweight champion.  On the other side of the country, another great legacy was taking root.  At an office building in downtown Phoenix, Orville F. Craig and his wife Della took out a $22,700 mortgage and purchased the newly built home on Lot #5 of Fleetwood Estates from The Stewart Title & Trust Company of Phoenix.  It was the second home for the couple and represented a step-up to finer things from their previous address in the Indian Park neighborhood at 6th Avenue and Glenrosa.  Though they stayed in the Phoenix area until their deaths (Della in 2001 and Orville in 2004), the Craig's sold their home to Charles and Beverly Rowland on December 22nd, 1965. 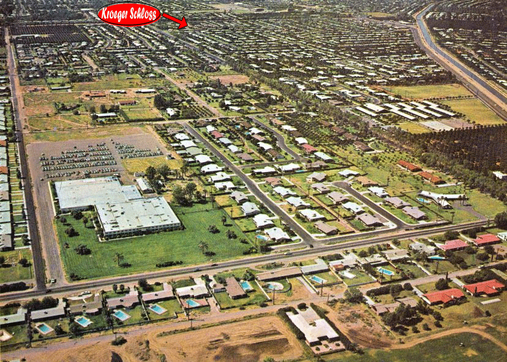 Arial view of the lower Arcadia area taken in 1962.
The Rowlands were a married couple in their mid-30s when they first moved into the house on 48th Way.  They would live there for over 20 years and would raise four children there: Christene, James, Bret, and Jeffrey.  From the war in Vietnam in the '60s to the war on drugs in the '80s, the Rowland family grew up in the house.  Eventually, as children so often do, the kids started lives of their own and each moved away.  So, on the 14th of January 1986, just 3 weeks after the 20th Anniversary of their purchase, Charles and Beverly Rowland sold their family home to Michael and Kathleen Dufrain for $120,000.

Like the Rowlands before them, the Dufrains also raised their children here.  Michael Jr., Melissa, and Kristina saw their mom and dad live in the home until Michael's death in 2000.  As a widow, Kathleen continued to stay in the home another four years until the Real Estate market changed and she received an offer she couldn't refuse.
"Her best yet!"  That's what MLS Listing No 2238080 proclaimed when the house on 48th Way was listed for sale on December 7th of 2004.  Less than a year earlier, on August 30th real estate investor Karly Tremblay had purchased the house from Kathleen Dufrain for $335,000.  2004 was the apex of the housing market surge that defined the first decade of the 21st Century.  Homeowners, Investors, and House-Flippers were making money hand over fist buying, renovating, and selling older homes and there appeared to be no end in sight.  The allure of quick easy money attracted people to the home remodeling market by the hundreds as novice designers and apprentice-level contractors scrambled to buy, flip, and sell homes as quickly as they could.  Karly Tremblay was one such investor.  In 2002 alone, she purchased four properties in the Orangewood Estates neighborhood near 7th Avenue and Missouri.  By 2004, she was ready to move her business to the Arcadia area and she purchased the Dufrain family home.

The transformation was astounding.  The exterior elevation of the building was completely changed by the addition of a pergola structure, new paint, and freshened-up landscaping.  Inside, the kitchen and dining room swapped locations, stylish moldings were added, and the bathrooms were completely renovated.  Virtually no surface was left unchanged by Tremblay during the three months she spent renovating the house.  So, when she listed it for $610,000 in early December, she was confident an eager buyer would fill her coffers by Christmas.

BEFORE & AFTER: Kroeger Schloss as it was lived in by the Dufrains (left) and after Karly Tremblay completed her remodel (right)
Unfortunately for Tremblay, the 2004 holiday season did not bring her a buyer.  The hot real estate market was still doing well, but it was definitely slowing down.  Regular price drops were necessary through the Winter and Spring until Andrew and Karen Goldstein finally stepped-up and purchased the home in July of 2005 for $555,000.

Though tax records showed the home as "Owner Occupied," Andrew and Karen Goldstein never actually lived here.  Instead, their daughter Paula moved in with her daughter Skyler.  Only a few years later, just as Paula and Skyler were comfortably settling in, the house was for sale again.  The Goldsteins had actually purchased the home along with two other couples as silent partners.  Like so many other would-be tycoons, the Goldsteins and their partners had purchased the house with the intention of holding it for a few years, then selling it for a significant profit.  And, also like so many others, they rushed to liquidate their investment when the housing bubble burst.  So, in January of 2010, the house they had purchased for $555,000 just four-and-a-half years earlier was offered for sale with an asking price of $545,000.

Matt and Kelly Kroeger were shopping for their "forever home" when they first stopped in at an open house in January of 2010.  Though they both fell immediately in love with the neighborhood, Matt was not a fan of the saltillo tile throughout the house, and they both agreed that the price was out of their reach.  So, they continued their home search through the Winter and Spring of 2010.  By June of that year, they still hadn't found a home to love and the Goldsteins still hadn't liquidated their investment.  By this time, the asking price had been reduced to $479,000 so the Kroegers decided to make an offer:  allow for an escrow holdback to pay for new hardwood floors, and we'll buy the home.  The Goldsteins accepted and Matt & Kelly ended up moving into the house in July of 2010.

Since then, Matt and Kelly have worked to make the house their home.  Large parties, intimate gatherings, and quiet nights alone have combined to transform the home into the Kroegers' Schloss - German for castle.  Their family and circle of friends are continuing to grow and they hope to continue to welcome everone into their home.  There's always room for one more at Kroeger Schloss!